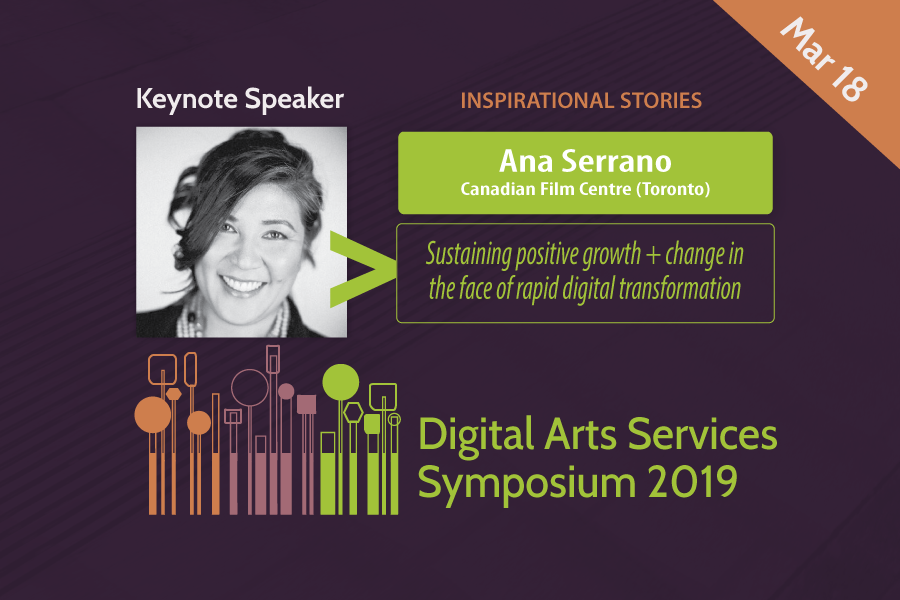 We are pleased to announce that Ana Serrano will be a keynote speaker at Digital Arts Services Symposium on March 18, 2019. Ana will share inspirational stories on sustaining positive growth and change in the face of rapid digital transformation in arts and culture.

Ana Serrano is the Chief Digital Officer of the Canadian Film Centre and Founder of CFC Media Lab, the world-renowned and award-winning institute for interactive storytelling created in 1997.  Most recently, she launched Canada’s first digital entertainment accelerator ideaBOOST with founding partners Shaw Media, Corus Entertainment, and Google. She has directed the development of over 130 digital media projects, mentored over 50 start-ups, and produced some of Canada’s seminal works in interactive media. Such projects include the critically-acclaimed Late Fragment, the first interactive dramatic feature film to be featured at the Toronto International Film Festival and distributed by Mongrel Media, to the most recent award-winning Webby-Honouree Body/Mind/Change, starring David Cronenberg, an interactive narrative experience that generates a physical 3D printed object.

Serrano has received numerous awards from the digital media, film, and theatre industries in both Canada and the U.S., including a DigiAward for Visionary of the Year, a Best Canadian Feature Film Award from the International Reel Asian Film Festival for her own transmedia production Prison Dancer: the Musical, and a Jim Blackaby Ingenuity Award for Body/Mind/Change.

She is an adjunct professor at OCADu, an Executive Member of the International Academy of Digital Arts & Sciences (IADAS) which presents the Webbys, and frequently speaks at digital media and film festivals around the world about the creation and business of digital entertainment.